Shaft Sealing
The slurry pump shaft seal is one of the most important mechanical elements in any centrifugal slurry pump and the correct type of seal must be carefully selected to suit each individual pump system. The three most commonly used seal types are as follows: 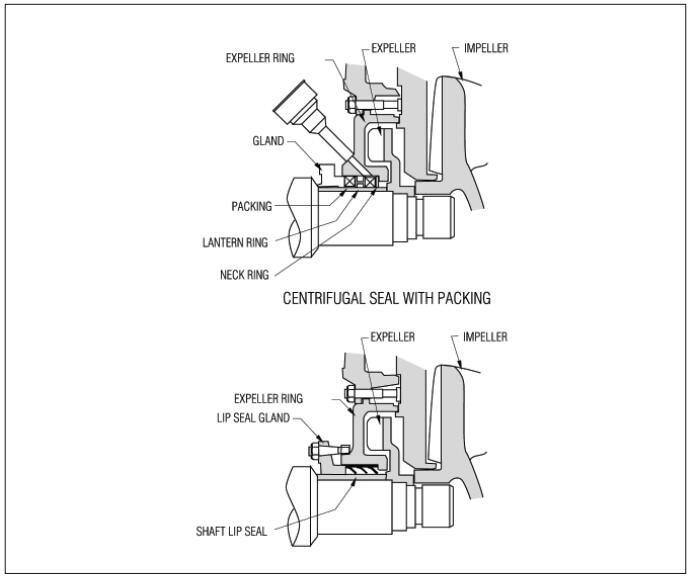 Because of its effectiveness and simplicity, the Expeller seal is the most common seal used in slurry applications, but it is limited by the slurry pump inlet pressure and the pump speed, (rpm). Performance data is available for centrifugal seal limitations for specific slurry pump sizes generally as shown in Figure 2.

Gland Seal
The soft, packed gland seal is the second most commonly used seal in slurry applications. The gland seal comprises a number of soft packing rings, compressed against a chamber (stuffing box) and a protective wear sleeve which is fitted to the slurry pump shaft. This type of seal requires continuous clean liquid lubrication and cooling between the rotating shaft sleeve and the compressed packing to prevent overheating due to the friction.

The quality, quantity and pressure of this gland sealing water is of prime importance and must be carefully matched to the duty required. The gland arrangement is shown in Figure 3. Note: This gland seal arrangement can be provided as a low flow seal by substituting the stainless steel lantern restrictor with a close tolerance P50 lantern restrictor. This will reduce the gland water consumption by at least half.

Mechanical Seal
Mechanical seals are not widely used in slurry applications but their use in special circumstances are increasing. The mechanical seal consists of a stationary and a rotating face pressed together under mechanical and hydraulic pressure to prevent leakage.

Alpha-grade silicon carbide or tungsten carbide are the most common materials used for manufacture of these seal faces.

The use of mechanical seals in slurry applications requires extreme care and attention due to the limited reliability common in this developing product. Seal costs are relatively high and require substantial justification to warrant their use.

Seal specialists are actively developing this type of seal expecting that a greater reliability and lower production costs will lead to an increase in use. Applications where a centrifugal seal cannot be used, and where the addition of water cannot be tolerated, provide the most likely areas for the use of mechanical seals.

One of the subtle benefits of the Slurry pump design is found in the fixture of the anti-friction bearings found on the rotor. While other manufacturers allow the inboard radial bearing to "float" in the housing, Slurry pump fixes that bearing in place. This feature, in conjunction with the short cantilever to the impeller and generously dimensioned shaft, produces a rotating element of unusual rigidity and resistant to deflection. Additionally, the shorter shaft length between the fixed radial bearing and the mechanical seal faces lessens the likelihood of encountering thermal growth problems that could over-pressurize the sealing faces. This is paramount in providing a mechanical environment that will yield maximum service life for a mechanical seal. A typical seal arrangement is shown in Figure 4. 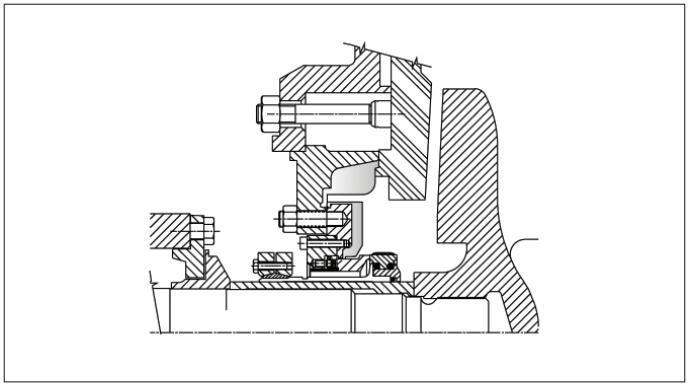